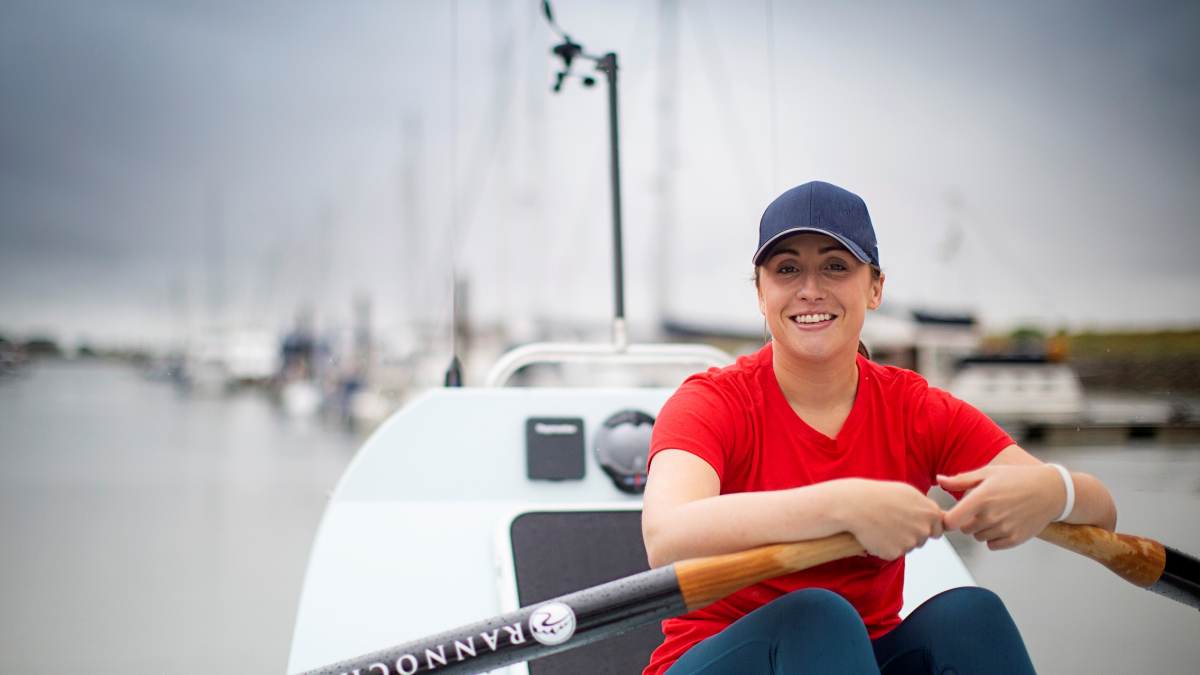 To ask for change is one thing. To be the change is another, altogether. In 2020’s first edition of She Speaks, we hear from the inspirational Victoria Evans who will soon be walking the talk on gender equality. Or rather, rowing. In February 2021 she will row solo across the Atlantic, aiming to break the world record for the fastest female to do so. She’s doing this because she wants to see a sea change in sport. This is why; in her own words.

Based in London, I work for Red Bull Media House as in-house Legal Counsel. I began my career at a private practice law firm in Manchester during which time I was seconded to adidas, my first experience of working in sport. Upon qualifying as a commercial and intellectual property lawyer in 2012, I took up a role in the legal team at ITV, supporting the commissioning teams responsible for both entertainment and comedy, and sport. After two enjoyable years in television, I accepted a role at UEFA in Switzerland. Arriving at their offices near Geneva in April 2014, I felt very out of my depth. I was a 27-year-old female lawyer in a French speaking, male dominated sports environment with only two years post-qualification-experience under my belt. The four years I spent at UEFA were a sharp but incredible learning curve. Providing marketing legal support for all UEFA competitions, I cut my teeth on some of the most high-profile sports events in the market, and had the pleasure of working at Euro 2016 in France.

With numerous sports federations based around the Geneva region, during this period I gained an invaluable insight into the operation of European level sport, and saw first-hand the power of sport as well as some of the hurdles the industry still needs to overcome. One such issue, which I feel particularly passionate about, is the need for greater gender equality both on and off the field. If this change is to be achieved, women need to be part of the conversation. As a starting point we need more women in executive roles.

Countless research, including studies by McKinsey and the Peterson Institute, have shown that gender diversity in management positions increases a company’s performance. We’re starting to see support for these findings in the corporate market, with David Solomon of Goldman Sachs announcing in January 2020 that the Wall Street giant will no longer be taking any company public unless it has at least one woman on the board. The requirement shall increase to two women by 2021.

Despite this, an investigation at the end of 2019 by UK newspaper ‘Telegraph Sport’ into gender diversity in international sports federations revealed that women continue to be “gravely under-represented at executive level”. They researched ten major federations including FIFA, the International Cricket Council, the International Olympic Committee, World Rugby and World Athletics. The greatest gender imbalance was shown to be on the ICC, where just one of the 18 board members is female. All the governing bodies they studied were shown to have fewer than 40% of women on their board, with three having just 25% female representation and none the ten boards being headed by a woman.

As a result, there have been calls for bodies such as the IOC to link funding to governance metrics. This echoes changes made in the UK where, in 2016, UK Sport and Sport England introduced the new ‘Code for Sports Governance’ which requires any organisation seeking UK Government and National Lottery funding for sport and physical activity to have gender diversity of at least 30% on their board.

This is just one example of where we need to drive change to reach gender parity and ultimately ensure that sport becomes accessible to everyone. Keen to put the benefit of my experience to good use, I decided I wanted to contribute to the conversation around these issues and sought out a challenge of sufficient magnitude that it would allow me a suitable platform.

After considerable planning, I landed on an ocean row. In February 2021 I will depart from Gran Canaria and head west to Barbados in a bid to break the world record for the fastest female to solo row across the Atlantic on the Trade Winds I Route. I’ve named the campaign ‘Sea Change Sport’ and will be working alongside various bodies, including UK charity Women In Sport, to increase awareness and to fundraise charitable contributions that will support further research and lobbying to drive change in this arena.

In February 2021 I will depart from Gran Canaria and head west to Barbados in a bid to break the world record for the fastest female to solo row across the Atlantic on the Trade Winds I Route.