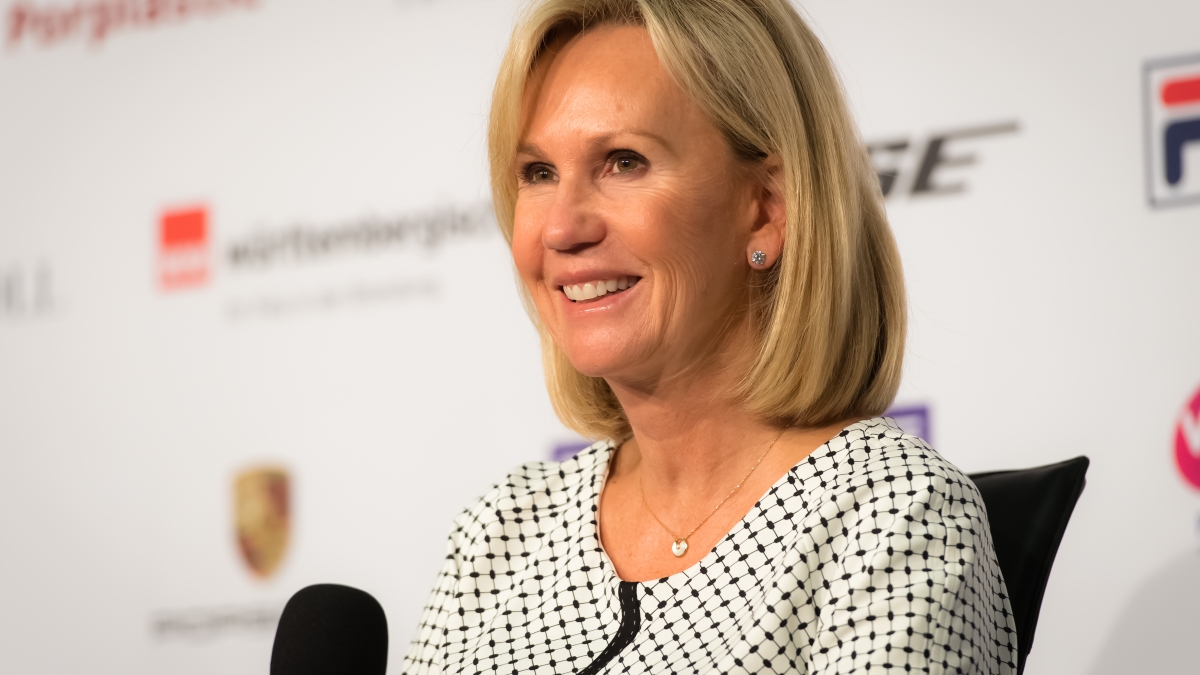 Sport is lucky to have Micky Lawler – president of the Women’s Tennis Association (WTA).

Originally wanting to work for the United Nations, but unable to get a visa to work in the US at the time, Micky returned to Europe to find a way to use her passion for sociology and her skills as a linguist.

A Dutch native, Micky is fluent in five languages, thanks to a colourful childhood which saw her live in the Netherlands, Colombia, Argentina, Bolivia and Kenya.

Micky has 33 years’ experience working in sport, including 26 years at Octagon, as Managing Director for Tennis and Global Initiatives.

She is also a mother to three children.

Getting Started in Sport

Sport was a big thing in our family… But I didn’t grow up thinking ‘oh I must work in sports’. In fact, I thought that I would work for the United Nations because that was the natural fit in my mind.

It was really difficult to find a job because in those days, unless you typed a certain number of words per minute or knew shorthand, the jobs for women were for women in the administrative or secretarial fields.

Teaching languages in Paris, Micky got her start in sport when she applied and was successful for a role as Press Attaché for the Men’s International Tennis Council – the predecessor to the ATP.

So that’s really how I got into the game.

Tennis Outside of Europe

As part of Micky’s previous role on the WTA Board, she helped establish the Wuhan Open in China and other tennis initiatives in emerging sporting countries like the Middle East.

The one thing in tennis that is super interesting especially on the WTA, is that the WTA has had the flexibility to take a parallel journey to events and growth that we’ve seen socio-economically.

So the WTA went to the Middle East when the Middle East was emerging as an economic power like no other. And the great thing about that is – while there’s a long way to go – I feel that women’s sports have a lot to do with social advancement as well.

Tennis’ expansion has not only been in China, but other parts of the world as well – Eastern Europe for example, so Eastern Europe has been very strategic in using its super strong tradition and culture in sports and women’s sports as well to again transition into the West and become one with the West, whilst still maintaining its cultural identity.

It’s been an incredible journey that’s for sure.

We want to encourage women to, if they want to, start a family, and not have that mean that their career as a professional athlete has to be over.

Thanks to the likes of Serena Williams and Victoria Azarenka, the WTA recently made some significant changes for athletes who take maternity leave. Now, players will have three years to enter a maximum of 12 tournaments under a protected ranking.

The fact that Vika [Victoria Azarenka] had a baby, and then Serena had a baby meant there was a lot of discussion around the time that they were out, their protected ranking, but then the seedings as well and having such a high-ranked athletes floating around the draw and whether it was fair to the players who had not been out and earned their position.

But the players decided what was fair and what was not fair. We want to encourage women to, if they want to, start a family, and not have that mean that their career as a professional athlete has to be over. So we provide an environment that encourages women to have families and keep competing.

We all need to work together to make sure a mother can be a mother first, but if there’s a way to structure things so that her role as a mother is never compromised and we can still ease the mother into not missing a beat at work, then that’s great for both sides.

Pros and Cons of Maternity Leave ​

When I started as a professional, women would be pegged into non-essential roles. Because the social benefits were and are such for maternity or paternity leave that as an essential member or an executive at a company, it would be very hard to step away for nine months or a year, and expect everybody else to carry the load and for this not to have a tremendously draining influence on the company or the team for which you work.

So that balance has to be achieved.

My own personal philosophy is that we need to use the flexibility that technology gives us to actually not step away completely.

We all need to work together to make sure a mother can be a mother first, but if there’s a way to structure things so that her role as a mother is never compromised and we can still ease the mother into not missing a beat at work, then that’s great for both sides. I know that’s really hard to do.

Dealing With Intimidation Of Being The Only Female In The Room

So to be honest with you I still have these episodes where I have this tremendous fear of public speaking. It’s debilitating to the point where I think I’m going to have a heart attack because the heart cannot physically beat this fast and this strongly and I can feel my neck and my chest getting completely red and my mind going blank.

So that’s some sort of anxiety that came I think because in those days I would push hard to break the mold. But respectfully break the mold. I felt this huge responsibility of, ‘okay, I’ve been given the opportunity and now I can’t screw it up, because my female friends here are counting on me to come through.’

And also because of a super respect for the men in the room and what they’ve done, where they’ve come from, and what they’ve achieved, and asking myself can I go toe to toe with them as a young woman.

I grew up in the bush sometimes, and in developing countries. The schools were.. great life schools but sometimes not the best academic schools. So we had to work extra hard to live up to European educational standard.

When you come to the developed world and you know everything about the developing world but all of a sudden everyone here has the schooling that we’ve had to work extra to try to equalise. So I grew up with the mentality that I have to do all this other work to be at the same level as you, and that is intimidating.

But it’s also really helpful because the humble gene never leaves.  And that’s key, in my opinion.

We need to be straightforward, we need to be very honest it’s okay to wear your heart on your sleeve, in fact, it’s good.

Advice To Women Working In Sport

The ideal situation for anyone in the workplace young or older is to work together.

There are things that the younger generation can offer to the older generation that are invaluable and the same thing goes in reverse.

We need to be straightforward, we need to be very honest, it’s okay to wear your heart on your sleeve, in fact, it’s good.

It’s never good to pretend to be someone you’re not.

When you come into a room and you have self-doubts, understand that no matter where the people in the room went to school, no matter what professional experience they have, how many languages they speak, you have a lot to offer that is complementary to what they have to offer.

Do you think women have specific strengths that differ from men that are an advantage when working in senior administrative roles?

Absolutely. It’s key to be authentic. If you need to cry, you cry. If you need to nurse your baby, you nurse your baby. You know, these are the things that make the world turn. These are characteristics that define and separate us from men. I think we should use being female to the advantage of the occasion.  If you look at the PM of New Zealand in the aftermath of that terrible shooting, she was authentic, and people responded well to it because the occasion called for that, it was completely appropriate.

Who is your role model?

I have many. I can tell you my father is a tremendous role model, and my mother and my grandmother and my grandfather. I mean we travelled all around the world, which was very hard for my mother.  She didn’t speak the language, she wasn’t working, she had to deal with a completely different culture, had no education, she was a team player like no other.

Throughout your career you learn so much from all your colleagues. My prior boss, who is still a very close friend of mine, he always said to me ‘your strengths are your weaknesses.’  He would also say to me you have to be really fair to the individual, until it’s unfair to the rest of the team. I think about those two things a lot.

Your Strengths Are Your Weaknesses

As a woman this is really applicable. I’m very emotional.  I think that can be a weakness to be too emotional. I cry very easily.  There are times when people say it’s really important that you don’t cry on this one.  When I cry it’s over, I completely let go, not good. Sometimes I win, sometimes I lose, and if I lose, it’s not good.

But at the same time, it’s good to really understand that I’m human, this is who I am.  Your capacity to empathise because of that deep emotion, you live it, you breathe it, it’s in your DNA, it’s very authentic.  I think that makes a very strong connection to the cause, to the goals you lay out. It makes for a good employee.

Your capacity to empathise because of that deep emotion, you live it, you breathe it, it’s in your DNA, it’s very authentic.  I think that makes a very strong connection to the cause, to the goals you lay out. It makes for a good employee.