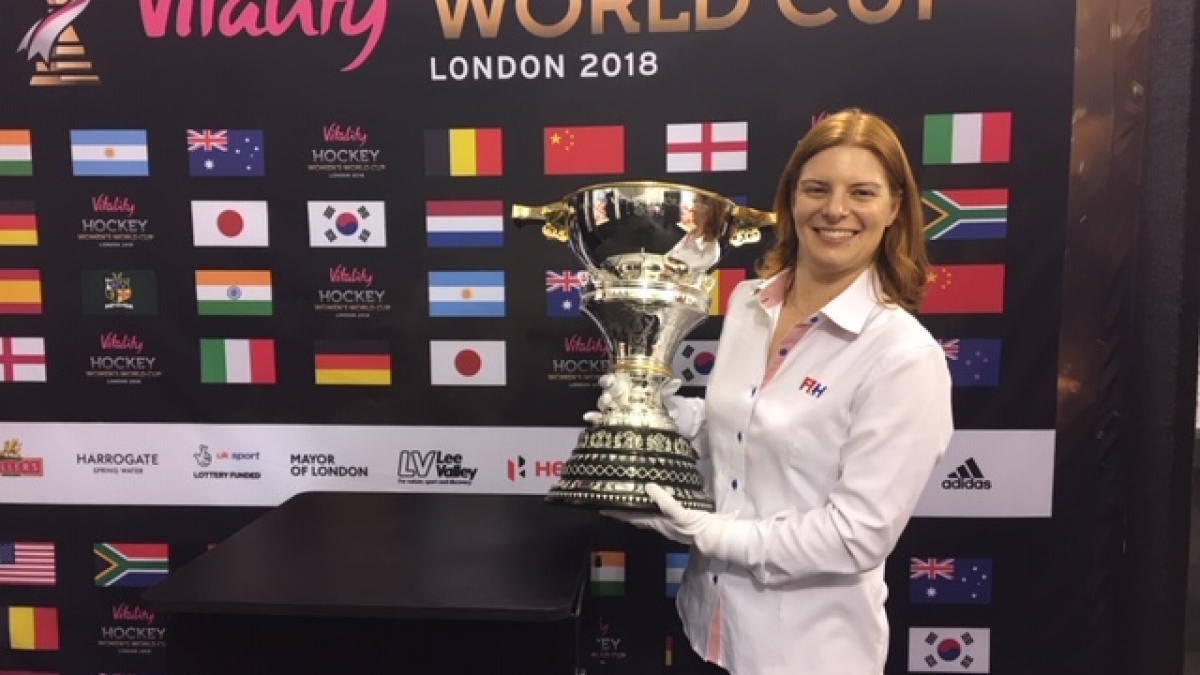 For our next edition of She Speaks, we caught up with Scotland native, Switzerland-living, Hilary Atkinson.

Hilary is a proud advocate for equality in sport and someone who leads by example, supporting women and men in and out of the workplace.

She has worked her way up the ranks at the International Hockey Federation (FIH) and manages a team of men and women working on the Pro League and the Olympic Games. She’s also a member of the Commonwealth Games Federation (CGF) Sports Committee.

Working at the International Hockey Federation

I work within a team of 36 international colleagues in Lausanne as Director of FIH Pro League and Olympic Games.

The FIH Pro League is our new annual global home-and-away league involving the world’s leading hockey nations that was inaugurated in January 2019 and has just completed its first season.

Whilst the FIH Pro League has been running, we have also been working with our colleagues in the Tokyo Organising Committee for Olympic & Paralympic Games and Japanese Hockey Association in preparing for the Ready Steady Tokyo Hockey Test event this summer as a key milestone ahead of the Olympic Games in summer 2020.

Your history in sports administration

I am enormously fortunate to be brought up in a family who have unequivocally supported my aspirations in life. My parents met and were involved, in particular, in badminton, another brilliantly equitable sport and I started at a young age helping my Dad when he was running tournaments. In my final year at school, I was granted leave to volunteer at the World Team Badminton Championships and by then I was officially hooked!

My first CEO, at BADMINTONscotland, was one of the longest-serving women holding a senior role in British sport, so I really didn’t consider gender as any kind of potential obstacle to a future in sports administration at that stage.

Since then I have had the privilege to work on two ‘home’ Games, at both the London 2012 Olympic & Paralympic Games and Glasgow 2014 Commonwealth Games, in what is a glorious decade of sport for Great Britain. As well as contributing at England Rugby 2015, before moving to Switzerland to join FIH and being offered the opportunity to contribute as a co-opted member of the CGF Sports Committee.

I travel quite a bit, which allows me to experience different cultures and meet many wonderful people who have dedicated themselves to hockey and other sports, often for their whole lifetime.

Every day in my working role is different, which is what keeps me curious and energised!

What does a typical day look like for you?

I travel quite a bit, which allows me to experience different cultures and meet many wonderful people who have dedicated themselves to hockey and other sports, often for their whole lifetime. Every day in my working role is different, which is what keeps me curious and energised!

Outside of work however, there are three things which are always part of my day; speaking to my family from wherever I am in the world is really important to me, catching up on the BBC news and sport before bed (especially keeping an eye on the Scottish Rugby team results) and some chocolate – I rarely get through a day without it!

The opportunities for professional growth throughout my career have come in a large part from working alongside and learning from an often inspirational and incredibly talented group of international colleagues.

I can also highly recommend IMD and Centre for Coaching Switzerland – both of which I have undertaken opportunities with more recently – if you are looking to pursue formal professional courses in Switzerland.

The sports industry is competitive, whatever your gender, and roles are often short-term contracts, or within smaller organisations where resources are more limited.

Of course, it depends on the role you are working in or looking to contribute to. In some cases, you might not be able to progress without taking a further specific qualification.

However, I am a firm believer that practical experience and application are as important as qualifications and there are many informal ways to achieve these.

The most straightforward (and often undervalued) of which is volunteering.

Whether it’s volunteering at an event, in a sports club, for a committee or within your own organisation. It is one of the best ways to demonstrate and gain an understanding of a new sport, operation or role as well as build a diverse network, all whilst making a valuable contribution to something and having fun at the same time!

Gender Equality at FIH and the Commonwealth Games Federation

I’m proud that both of these organisations have gender equality at the heart of their strategies and have worked together to support each other, specifically in a number of these initiatives.

Equality is one of the three core values of the Commonwealth Games Federation (CGF) and at the 2016 CGF General Assembly in Canada, CGF launched a strategy which strives to ensure that women and girls are equally represented, recognised and served across all areas of the Commonwealth Sports Movement and sets the benchmark for gender equality standards in international sport. Non-discrimination is now a clause in all the CGF host-city contracts. At its helm throughout this period has been the CGF’s first female President, Dame Louise Martin.

The 2018 Gold Coast Commonwealth Games were widely applauded as the first multi-sports event ever with a Reconciliation Action Plan and Gender parity in the number of medal events at Gold Coast 2018 between women and men for first time ever. Basketball, Hockey and Swimming featured over 50% female Technical Officials; a first in international sport.

The FIH launched its Hockey Revolution Strategy in 2014 and one of its core commitments was to promote gender equality, inclusion and diversity in sports practice and governance across the #EquallyAmazing aspects of the sport.

FIH has championed this on the pitch, where the competitions and prize money are the same for men and women, supported by equal numbers of male and female technical officials. Off the pitch FIH has an equal involvement of men and women in the committees and panels of the International Federation and hockey governing bodies and has delivered FIH Academy education courses specifically focused on women’s performance coaching, just a few examples of its ongoing promotion of equality.

As a further milestone of its #EquallyAmazing strategy promoting gender equality, FIH has recently inaugurated a new Women in Sports Committee, chaired by FIH Executive Board member Marijke Fleuren, who is also a member of the IOC Women in Sport Commission.

The Sports Industry as a whole is working hard to overcome obstacles to gender equality, such as its history of predominantly male leadership, limited number of female role models, lack of female high-performance coaches and officials, unequal prize money and an uneven distribution of media coverage across some sports.

There are many examples of specific work being done to overcome these through the leadership and governance of the IOC’s Gender Equity Recommendations, the International Federations and National Federations own strategies (ITF Advantage All Campaign designed by She Speaks interviewees Pure Purple, and World Rugby’s ‘Try and Stop us’ are recent examples). However, there is much more to do.

How can we support our organisations to be more gender equal?

I have been fortunate to benefit from opportunities offered to me by both great men and women and if you are in a position to, one simple way to support your organisation to be more equal is to employ or appoint as many great women as men into your business and encourage others to do the same! This is something I have championed throughout my career.

It is my opinion that sometimes women don’t put themselves forward for roles or opportunities that they are well suited for. Everyone, whatever your role in a workplace, can help uncover, highlight and promote talented women to those around them and endorse a collaborative culture in the office that anyone male or female would be happy to join!

I’m still learning every day myself, but if I’m asked and I am able to help someone in a small way, it’s a pleasure to be able to do so.