Why does someone decide to cycle 20,435km from Switzerland all the way to New Zealand, through 19 countries, over 354 gruelling days? What keeps the motivation going even after sleeping in highway drains, bus stops and deserted buildings? How did Rebecca ‘live out her dream’?

“It’s been an interesting experience. Especially the mental gymnastics of getting up every morning and wondering how you’re going to get to your next destination.” – Rebecca Wardell.

When four women take on the challenge of climbing the Matterhorn together, what makes them tick? What were the challenges and the triumphs? Why did Anne-Sophie Thilo impose this ultimate test of endurance upon herself?

“After retiring from professional sports, I missed the sensation of ‘working hard for a crazy objective’ so much, and with #MatterhornLadiesPlease I found it again and I just fell right back in love with it ! Technically it was ok, physically it was hard but as at the Olympic Games, the mind was key to reach the top!” – Anne-Sophie Thilo.

Two extraordinary women and their astonishing stories! Come and join She Sports Switzerland for the evening on Tuesday 12 November, to listen to Rebecca Wardell and Anne-Sophie Thilo, and find out what they can teach us about everyday resilience, ambition and success. Freely ask YOUR questions in an intimate, supportive and stimulating environment and take home some concrete, actionable insights for your life and career.

Networking optional; just come along, be inspired and chat to like-minded people, working in sport!

Welcome drink on arrival and nibbles served throughout the evening.

Pay below via PayPal, or by BACS please email: hello@SheSportsSwitzerland.com

From competing in the Summer Olympics, to organising the Winter Olympics, Rebecca Wardell has seen it all. The Kiwi Heptathlete last year decided to take ‘the long way home’ completing a bike ride from Lake Geneva (Switzerland) to Lake Hawea (New Zealand) via seventeen countries!

Riding through Europe, Central and South East Asia, Wardell was joined on the adventure by friends Emma Twigg and Sarah van Ballekom. However as the pair returned to their ‘real lives’, Wardell continued on to completing the mission solo.

Along the way, she raised money for young New Zealand athletes through the Forward Foundation as well as for Victim Support in Christchurch. 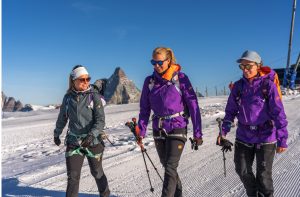 Born in Lausanne (Switzerland) in 1987, Anne-Sophie Thilo has been part of the Swiss Sailing National Team for 12 years as a professional sailor. Being a two time Youth European Champion and Youth Worlds silver medallist, she participated at the Beijing 2008 Olympic Games. In 2006, she and her teammate ended up at the 5th place at the World Sailing Games and became silver medallist at the 470 (Olympic class) European Championship in 2008 a few weeks before the Olympics.

Having been coming to Zermatt since she was a child, In 2019 Anne-Sophie took on the challenge to climb the Matterhorn as part of a group of four women in “Matterhorn: Ladies Please!” Project.

Connect with Anne-Sophie on social media:

Located in Lausanne (HQ) and Valais (production), Urban Kombucha serves up local (Swiss-made) and quality products. Business partners Arnaud and Romain run the show and have their Kombucha production down to a particular science. They’ve innovated Kombucha flavours such as Green Tea & Ginger, Lemon and Hibiscus, and Green Tea & Mint! Not to mention, they’re partnered with Nébuleuse – a locally made beer- while the owners even produce mulled wine!

Summer evening picnic by the lake

How do you add to the beauty of the world? with Lizzie Brazier